Something has happened to my boy. My boy who last year i would have described as 'quiet' and 'gentle', a boy that was not fussy, did not back chat and was overall, pretty much a sweet heart. My little boy has turned... 4 years old (dramatic music... ba ba buuuuuuum). Someone told me the other day that little boys have a surge of testosterone at about the age of 4 and i just googled it and found this...

"Hormones play a large part in that much loved phase in the life of so many four year olds boys when activity levels surge, and vigorous physical play, and a fascination with super heroes becomes the main stay of the boy's play. Around the age of four, boys' testosterone levels in the blood, suddenly double and that little boy changes quite suddenly and dramatically into a strong active child with limitless energy and a fascination with rough and tumble and very boisterous play. Mercifully for the boys and parents, this hormone level drops around the age of five to normal levels." (source: The PreSchool Directory).
OMgosh... there is no mercy in being told this will last a whole year. This is exactly what has happened.

This week I have seen tantrums like i have never seen before, objects be hurled across the room, stamping of feet, flapping around the floor like a human blowfly. I have had all  my buttons pushed and at time watch my boy stomp and shout and pout and thought 'you know what, i'd really like to do that now too'.
So last night I turned to the place that all cyber saavy mum's turn to for creative wisdom and inspiration... Pinterest. I remembered that i had seen two 'pins' that just may hold the answer: 1. "21 creative consequences for disobedient children- Some of these are AWESOME and some are just plain HILARIOUS - but probably effective" and 2. "Teach your kids to work! 43 chores young children can (AND SHOULD) do (18 months to 7 years old)" both pinned by Modern Parents with Messy Kids (click on the links to see any of these articles or visit MPMK's blog - it's great).
After my son's first session of whinging about not being allowed to have cake for breakfast this morning, followed by the stamping of feet, throwing of a board game and then a brief smack from me (yes, I smack occassionally, and no I don't want to hear you're opinion on it - unless of course you do to) I was standing at the sink, composing myself when inspiration hit ... I have devised a plan, whether it works is not the point, the point is that we are going to try something new.

Enter the "Calm Down Dinosaur" jar... 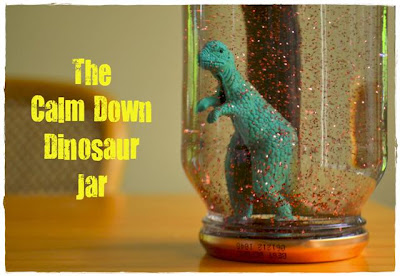 So the theory is that as my son starts to fall into a fit of doubled testosterone, 4 year old paroxysm, I will say "Calm Down Dinosaur" and he will get his jar, shake the <beep> out of it, then watch the glitter settle (consequently settling himself).

So, what do you reckon? Do you need one? 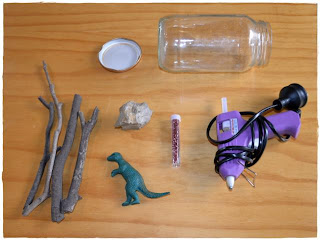 (The rock was to slightly elevate the dinosaur & the sticks were for extra dramatic affect). 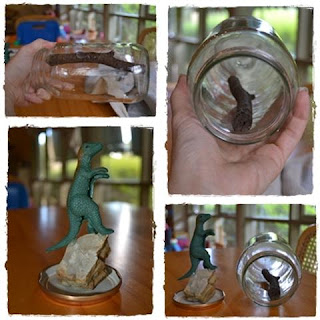 1. wash your props so the glue sticks well (esp. if they're sticks/rocks)
2. glue all props to the inside of the lid of your jar
(FYI: the rock was too heavy so we ended up using a piece of wood and once it and the dinosaur were stuck to the lid there was no room for the sticks so we glued the stick to the side of the jar).
3. let your glue dry (admittedly, i did not wait long).
4. fill your jar with water and add glitter.
5. hot glue around the rim of the jar and screw the lid on)
Done.
So, here's hoping. I was somewhat pleased to hear my son tell Daddy that he had made a "dinosaur calm down jar". Only time will tell. Good luck peeps.

But seriously, look at this kid, at the end of the day he'll always be my sweetheart.

Oh I need one of these Kellie! Completely at the end of my tether with my Master 4. He loses the plot on a regular basis and this might help with the calming down. How has it worked for J?

We don't use it anymore, as the phase has passed - thank goodness!!! At the time though it was a welcomed distraction and response option for both of us. He even said to me very sternly one day "I'm going to shake my jar!" lol.

On a practical note: it was a mistake putting the wood in there as it turned the water brown and yuk, so use something that won't breakdown.

Half Done Mum
Hi, my name is Kellie. I am mum of 2, wife to 1, brilliant at starting and terrible at finishing. Hence i am starting this blog, as a way of putting it out there into cyber space, into the universe, that i will finish those crafty endeavors that I start.

I hope you enjoy my blog.